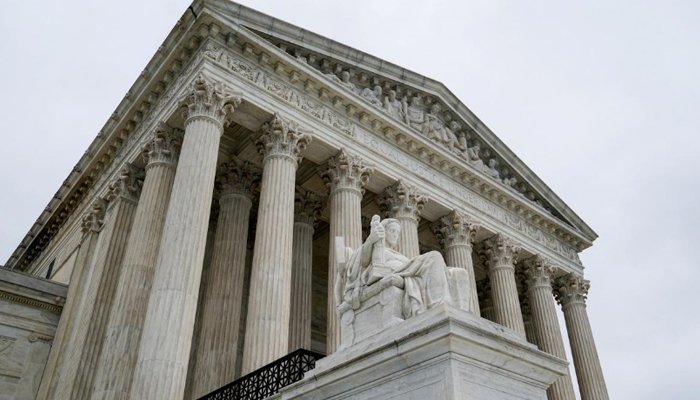 WASHINGTON:The U.S. Supreme Court, winding down its nine-month term, will issue rulings this week in its few remaining cases including a major one on the legality of President Donald Trump’s ban on people from five Muslim-majority nations entering the country.

The nine justices are due to decide other politically sensitive cases on whether non-union workers have to pay fees to unions representing certain public-sector workers such as police and teachers, and the legality of California regulations on clinics that steer women with unplanned pregnancies away from abortion.

The justices began their term in October and, as is their usual practice, aim to make all their rulings by the end of June, with more due on Monday. Six cases remain to be decided.

The travel ban case was argued on April 25, with the court’s conservative majority signaling support for Trump’s policy in a significant test of presidential powers.

Trump has said the ban is needed to protect the United States from attacks by Islamic militants. Conservative justices indicated an unwillingness to second-guess Trump on his national security rationale.

Lower courts had blocked the travel ban, the third version of a policy Trump first pursued a week after taking office last year. But the high court on Dec. 4 allowed it to go fully into effect while the legal challenge continued.

The challengers, led by the state of Hawaii, have argued the policy was motivated by Trump’s enmity toward Muslims. Lower courts have decided the ban violated federal immigration law and the U.S. Constitution’s prohibition on the government favoring one religion over another.

The current ban, announced in September, prohibits entry into the United States by most people from Iran, Libya, Somalia, Syria and Yemen.

In a significant case for organized labor, the court’s conservatives indicated opposition during arguments on Feb. 26 to so-called agency fees that some states require non-members to pay to public-sector unions.

Workers who decide not to join unions representing certain state and local employees must pay the fees in two dozen states in lieu of union dues to help cover the cost of non-political activities such as collective bargaining. The fees provide millions of dollars annually to these unions.

The justices seemed skeptical during March 20 arguments toward California’s law requiring Christian-based anti-abortion centers, known as crisis pregnancy centers, to post notices about the availability of state-subsidized abortions and birth control. The justices indicated that they would strike down at least part of the regulations.