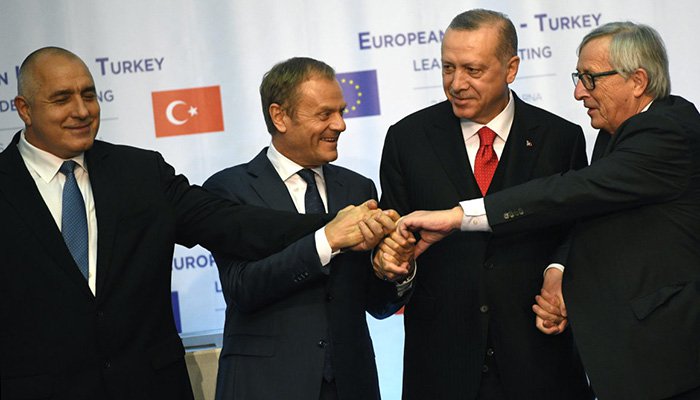 With virtually all votes counted, Erdogan took 53 per cent of the vote while in the parliamentary vote his AK Party took 42.5 per cent and its MHP nationalist allies secured 11 per cent, outstripping expectations.

“We hope that under President Erdogan´s leadership Turkey will remain a committed partner for the European Union on major issues of common interest such as migration, security, regional stability and the fight against terrorism,” a spokesman for the European Commission told a regular briefing.

Turkish President Recep Tayyip Erdogan on Monday celebrated winning five more years in office with sweeping new powers after a decisive election victory, as his main rival accepted the outcome despite bitter complaints over the conduct of the campaign.

A night of triumph for Erdogan saw the man who has dominated Turkey for the last 15 years declared winner of Sunday’s presidential poll without needing a second round and lead his ruling party-led alliance to an overall majority in parliament.

Erdogan, whose victory was wider than predicted by many analysts, vowed to “rapidly” implement the new presidential system agreed in an April 2017 referendum that opponents fear will give him autocratic powers and could keep him in office for another decade.

The new system creates a vertical of power with Erdogan at the top, giving him the power to appoint cabinet ministers and dispensing with the office of prime minister.

The president, 64, declared victory in Istanbul before returning to Ankara to deliver a triumphant speech at 3:00 am to tens of thousands of supporters from the balcony of the headquarters of his Justice and Development Party (AKP).

“Turkey has given a lesson in democracy to the entire world,” he added, pointing to a turnout of 88 percent.

His main rival Muharrem Ince of the Republican People’s Party (CHP), who had challenged Erdogan with an energetic campaign, broke an uncharacteristic overnight silence to declare on Monday he accepted the results.

“I accept these election results,” Ince said, adding Erdogan should “represent 80 million” and be “president for us all”.

But Ince, who had faced limited airtime on television in the campaign and a near boycott by state media, said the run-up to the election had been unfair.

“This election was unjust until the results were announced,” he told a news conference at CHP headquarters after ordering out crews from state-run TRT over their campaign coverage.

Ince vowed to “continue our fight until Turkey is a Turkey for everyone”, expressing alarm over the powers Erdogan assumes under the new system which he described as “a one-man regime.”

US Supreme Court poised to rule on Trump travel ban, other…